Palm Sunday begins Holy Week - the period before the Resurrection of Christ, abounding in traditions and customs known to Christians from the East and the West. These customs are primarily cultivated on the Wooden Architecture Route in Małopolska. One of the most exciting days is Holy Saturday, and a project carried out by the Małopolska Tourist Organisation allows taking a closer look at the traditions of this day in Małopolska.

One of the most recognisable and popular customs is the blessing of food on Holy Saturday. In the Roman Catholic Church, the contents of the baskets in which products are brought for blessing vary in different regions of Małopolska. Nonetheless, symbolic foods predominate:

In some areas, a potato trimming, i.e. a piece of potato to be planted, was placed in the basket to ensure a good harvest. Cheese, cold meat, as well as butter were also blessed. It happened that matches were put in the basket to light a fire under the kitchen. Eggs were usually painted in colours or coloured with onions. Food baskets used to be much larger than today, as they had to hold a whole loaf of bread, for example. 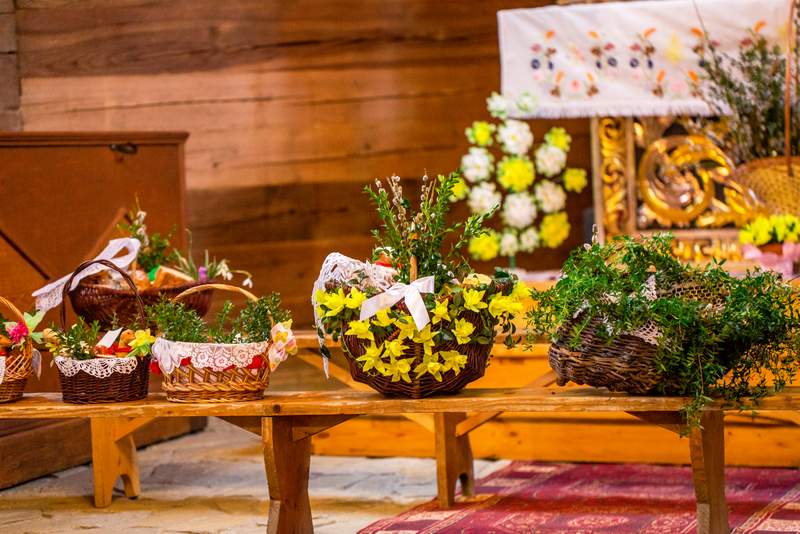 In the Podhale region, food called 'święcelina' used to be blessed in woollen bags. Later, baskets made of juniper roots and, still later, of wicker began to be used for this purpose. The basket had to be covered with a linen napkin and decorated with green twigs of myrtle, bilberry or boxwood. Here, one went around the homestead with the holy bread saying: "Run away from home as I'm going home with the blessed food!". In other regions, it was also customary to go around the whole house with the blessed food, which was supposed to ensure abundance and prosperity.

In the Sucha Beskidzka region, burnt hazel sticks were taken home after the evening liturgy and the blessing of fire and water on Holy Saturday. They were then driven into the fields, three in each corner, to ensure fertility.

Moreover, Holy Saturday was accompanied by an exciting custom of burning polypore, which was cultivated, for example, in Bukowina Tatrzańska or Stryszawa. Polypores were nailed on sticks and set on fire from consecrated Paschal candles, and with such a torch, the house was walked around and incensed to drive out evil spirits and ensure good luck.

In the Greek Catholic and Orthodox Churches, the feast of the Resurrection of Christ, or Woskresienije Christowo, is celebrated at the other time than in the Roman Catholic Church. Sometimes the time lag can be even five weeks. That is due to the use of a different calendar to calculate the date of the holiday.

On Holy Saturday in the church, there is a midnight service, the so-called 'połunoszcznica', which begins the celebration of Easter. After the evening service on Holy Saturday, food is blessed. Traditionally, baskets with food should be blessed in front of the church because bringing meat into the temple was forbidden on that day. It is still done in many places, for example, in Bodaki and Hańczowa.

The Lemkos have eggs, bread, sausage, bacon, horseradish, salt, vinegar, baked cheese and, on Maundy Thursday, also Paska (traditional round wheat bread) blessed. After that, Paska is shared at Easter breakfast. It was eaten in many homes throughout the entire holiday in the past. The blessed Paska has extraordinary healing and magical properties, which is why it was usually cut off three heels (pieces) and kept at home. These heels cured stomach ailments and headaches, and when burnt in the oven, they warded off storms. 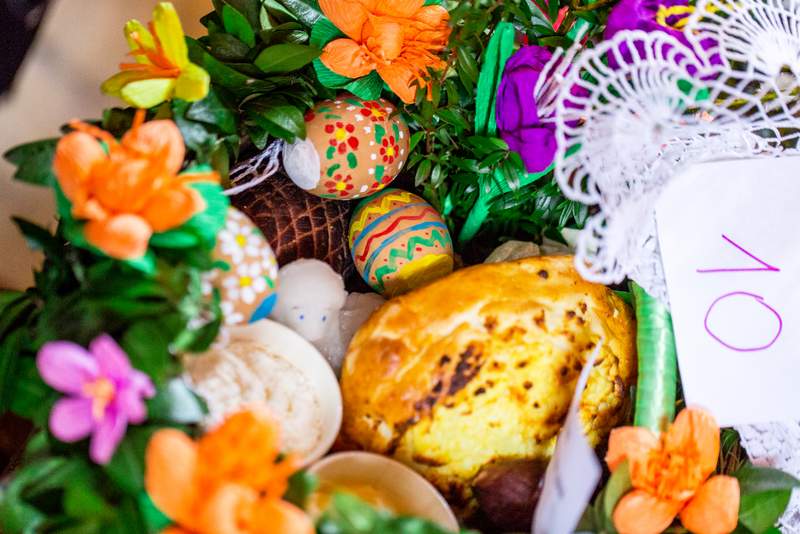 Paska, and often many of them, used to be carried for blessing, usually in a sheet (wrapped in linen) by a man, while a woman carried the basket with food. Eggs, an ancient symbol of fertility and the continuity of reborn life, play a specific role among blessed foods. In addition to uncoloured eggs or eggs dyed in one colour (most often in plum roots, onion skins and green rye shoots), the traditional basket was filled with decorated Easter eggs ('pisanki'). Painting Easter eggs is still an important tradition among the Lemkos, and they should be prepared, just like stripes, on Maundy Thursday. There is an interesting Lemko legend connected with the creation of Easter eggs, according to which "(...) when Christ was being nailed to the cross, blood dripped from his wounds and trickled down into little red eggs ('kraszanki'); Mother of God, who was standing under the cross, drenched them with tears, turning them into Easter eggs. Martha collected them, and Our Lady gave them to the children as a reminder and a warning to live in mutual love." This legend may have been connected to the custom of women giving Easter eggs to children in front of the church.

Throwing Easter eggs through the house so that they do not break is yet another interesting custom. Broken eggs should be carefully collected. In the basket brought for blessing, there must also be a candle lit just before the food blessing, and it should burn to the end. It is a symbol of man and of Christ, who gave himself to death. According to tradition, after the food is blessed, it should be taken around the house three times to protect it "from evil."

You can read more about those and other customs on tradycje.drewniana.malopolska.pl and in the catalogue "Holidays, Traditions and Customs on the Wooden Architecture Route in the Małopolska Region" available in electronic form in PDF format or Flipbook that is convenient to browse. The content on the website and in the catalogue concerning feasts of various rites, as well as folk traditions, connected with caring for one's home, has been supplemented with interesting illustrations and films.